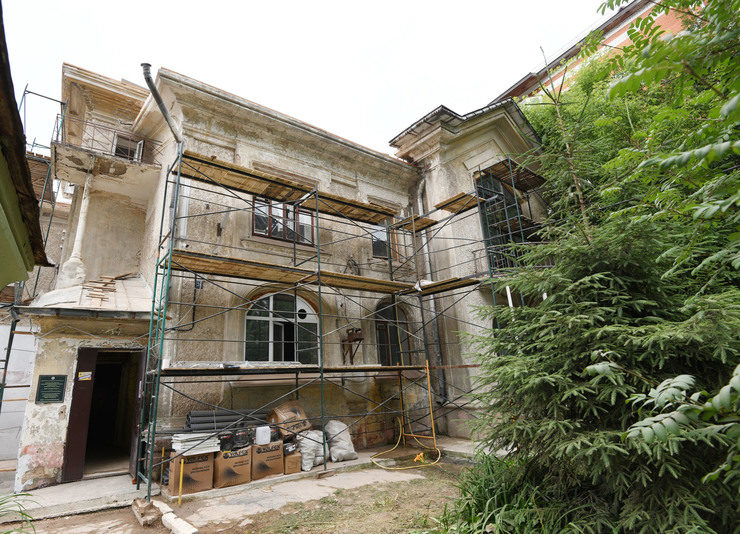 I.Metshin: “Working together with the citizens, we will completely improve the yards in Kazan in three years”

Today, the mayor of Kazan Ilsur Metshin visited the yard of houses № 20, 22 and 24 at Chetayev street, where the improvement works were carried out this year. The overhaul of the yard territory was carried out after the appeal to the mayor by a local citizen- writer Kamil Karimov. The mayor inspected the yard and noted that the activity of citizens is playing a special role in the comfortable living development.

The writer Kamil Karimov raised the point of the yard improvement at Chetayev street during the debate of the preliminary vote of candidates for the state and local governments. He asked the possibility to get acquainted with the list of the yards included in the overhaul program, and reported of a bad state of the yard. “I have lived here for more than 25 years, and during this time our yard has never been repaired,” Karimov said.

After that, the mayor of the capital of Tatarstan inspected the yard during the working meeting and instructed to develop a project of its improvement.

Local residents participated in the development of the project, while the overhaul works were conducted by the contractor OOO “Kazandorstroy”.

The residents mainly complained to the shape of the asphalt pavement. Now, this issue has been completely improved – the total area of the repaired asphalt pavement was 3,720 square meters.

The yard was equipped with the kids playing complex, a basketball ground and a recreation area. In addition, by the internal funds of the residents, the yard was provided with a parking area, a fence, a parking gate arm and CCTV.

Kamil Karimov noted that residents liked the renovated yard. “We are very glad that our yard has finally been transformed – Karimov said. – Now we have a lot of children playing in our yard, who used to visit the playgrounds in the neighboring yards before”.

Under the Republican program, more than 9 million rubles were invested for the yard repair. In total, this year 1 billion rubles have been allocated for the repair of yards. “By step, we will repair all yard areas of Kazan. Thanks to the President Rustam Minnikhanov, who decided to implement a large three-year program for the improvement of yards", – the mayor said.

Ilsur Metshin thanked the citizens for their activity. “Partial people live here, they were involved the reconstruction works, he said. – When the funds allocated for the repair of the yard is one thing, and another thing is your activity, when you share your opinion and contribute. Therefore, the yard has become awesome. We would like to have such active residents everywhere. You know how to raise a point, and solve it together. Working the same way in other yards together with citizens, in the next three years we will completely solve a problem of improvement of the Kazan yards”.

Yard areas in Kazan are being repaired in milestones, they are included in the program, taking into account, first of all, the feedback and complains of the citizens. “We constantly study the concerns of the citizens. Over the past 10 years, the issues that people complain have changed a lot – said I.Metshin. – If earlier citizens complained of the leaking roofs, entrances, communications, today in the majority these problems have been solved. Now the main issues are the creation of public spaces nearby, the opportunity to walk and recreate with children in the yard. It shows that we are moving forward, but we still have a lot of work to do”.

In total, 296 yards with a total area of more than 300 thousand square meters are included into the improvement program this year in Kazan. Since 2013 till the end of this year, 1885 yards will be repaired in Kazan.

The inspection was also attended by the deputy head of the Executive Committee-Chairman of the land improvement committee Igor Kulyazhev, head of the administration of Aviastroitelny and Novo-Savinovsky districts Timur Alibayev and others.

Multimedia
Previous news
I.Metshin on the zoo opening: “We have faced a huge number of requirements, which we carried out step by step”
Next news
The mayor of Kazan congratulated the law enforcement officers on their professional holiday
Personal
Official site