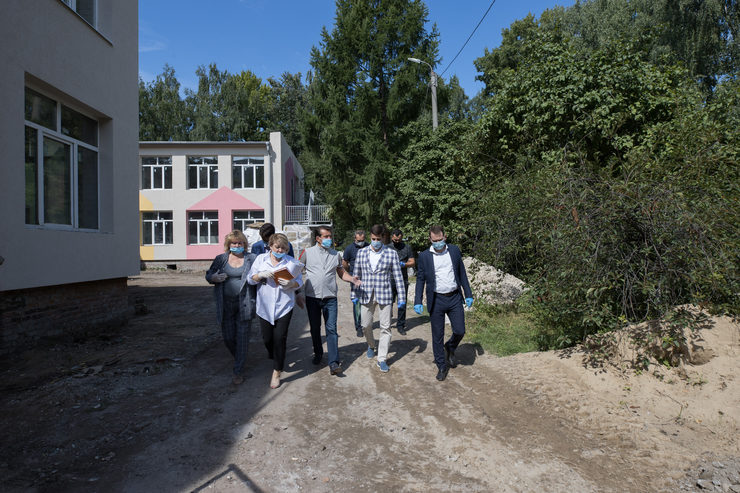 An open-type sports and wellness complex is being built in the Privolzhsky district of Kazan, nearby the gymnasium №21. A football pitch 94x49 m size, a hockey rink, a workout area, and an athletics sector will be located on the territory of the sports facility. Ilsur Metshin, the Mayor of Kazan, inspected the construction of the sports venue.

The Mayor of Kazan emphasized that the opening of the sports and wellness complex will be a long-awaited event for citizens. “There was no football pitch in the Gorki residential area, parents of the Privolzhanin sports school trainees addressed to us with a request to build a convenient sports playground. This pitch meets all UEFA requirements. There will also be a hockey rink with stands and locker rooms with all necessary conditions. This sports complex will be a great gift for young athletes for the Day of the city and the republic”, - said I.Metshin.

The construction of an open-type sports and wellness complex on Richard Sorge street, 71 is being carried out under the Sport – the norm of life national project. Initially, the project planned to replace the old football pitch with a new one, 30x60 m size. Thanks to the support of Tatarstan President Rustam Minnikhanov, additional funds will be allocated and a full-sized 94x49 m football pitch will be built. According to Albert Salikhov, the Chairman of the Committee of physical culture and sports, the pitch of this size fully meets the requirements for holding official Championships of Tatarstan and Russia.

“The Privolzhanin sports school was established 20 years ago, and more than 200 football players practice sport here”, - Albert Salikhov told the Mayor of Kazan. Young athletes can start training in the new academic year – the sports and wellness complex is planned to be completed by August 30.

Construction work on the site started in early June. At the moment the work is completed by 35% - the dismantling of the old pitch and a bed of gravel were made, as well as the basement for the running tracks.

“We have set a goal to engage more than half of the citizens of Kazan in sports in the near future. The adults should become an example for children – Ilsur Metshin said. – We want to see healthy Kazan. We believe that we will be the most sporting city not only in the Volga region, but also beyond its borders”.