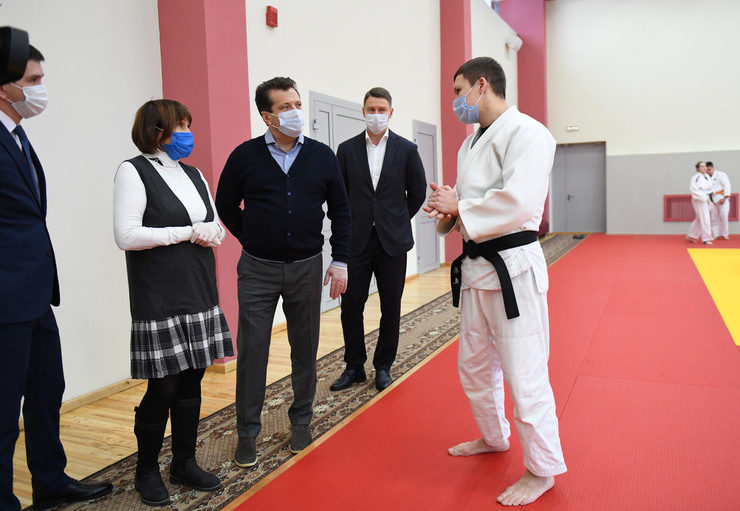 The Mayor of the city Ilsur Metshin inspected the results of the work.
read more
News

Today, Tatarstan President Rustam Minnikhanov visited the Sakharov station under construction of the second subway line in Kazan. The Mayor of Kazan Ilsur Metshin, the management of MUE “Metroelektrotrans” and JSC “Kazmetrostroy” accompanied him.

Construction of the first section of the second metro line from the Fuchik station to the Sakharov station began in 2018. Today, the main works are in progress: base concreting and excavation of the two tunnels. Marat Rakhimov, Director General JSC “Kazmetrostroy” noted that the length of the tunnels is 2.2 km. The first vehicle, which started on April 23 this year, has presently covered 1.1 km. Today, with the participation of Tatarstan President, the second tunneling complex was launched.

Marat Rakhimov added that employees prepared the site for the construction of the station “100th anniversary of the TASSR”. In general, at the entire second subway line, the work on re-laying and tabbing of the engineering networks continues, Tatarstan President’s Press Office reports.

Rustam Minnikhanov wished the builders a successful construction and urged to comply with all security measures.

For information, the second line of the Kazan metro will connect five districts of the city: Privolzhsky, Sovetsky, Novo-Savinovsky, Moskovsky and Kirovsky.

The construction of the second subway line is divided into several stages. The length of the first section from the Fuchik station to the Sakharov station will be 5.37 km and will include four stations - Fuchik, 10th sub- district, 100th anniversary of the TASSR, Sakharov.

Multimedia
Previous news
New train “Moscow” in the Kazan subway: “smart” lighting and no inter-car doors
Next news
Ilsur Metshin: “In winter, the territory that is being cleaned from snow in Kazan is equal to the distance from our city to Poland”
Personal
Official site