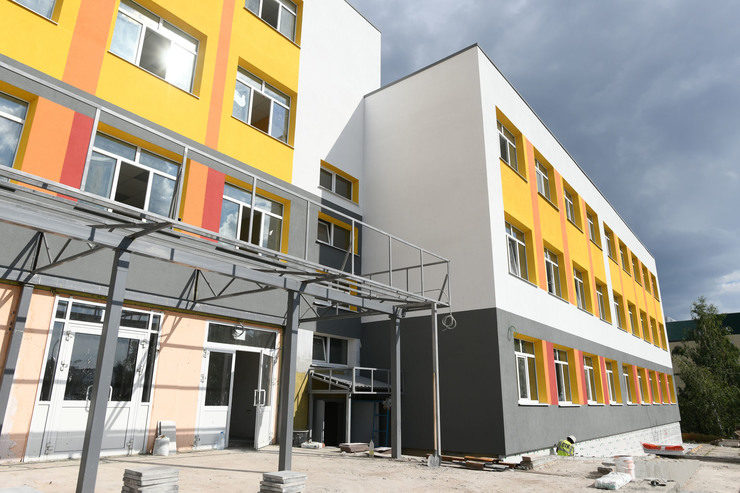 The renovation of gymnasium No.18, schools No.131 and No. 143 is being completed in Kazan

A newly built extension to gymnasium No. 18 will allow 300 more school students to be admitted this year.
read more
News

Ilsur Metshin: “The number of people who enjoy spending time at their yard will increase every year”

In Kazan, solar panels were installed on the roof of the residential building on Volgogradskaya Street. They will allow residents to save on electricity bills. The yard is cleaned by special electrical vehicle, which is charged here – from the first yard station for e-cars in the city. Such innovations were provided during the landscaping of the territory under the Our Yard program.

“A lot of work has been done over the past years. We see beautiful and cozy district thanks to this”, - said Ilsur Metshin, the Mayor of Kazan, who inspected the progress of the work. He reminded that this year about 110 thousand people will be able to see changes provided by the program. As of today, the work has been completed on the territories of 224 apartment houses, and the program has been completed by 75%, the Mayor noted.

The yard on Volgogradskaya St. 2 was built almost 60 years ago. The head of the administration of the Kirovsky and Moskovsky districts, Sergei Mironov, told Ilsur Metshin that the improvement of part of the territory of the houses was completed last year. This year, work is being carried out in the yard opposite houses 152 and 154 on Dekabristov Street, now they are already 90% completed. “We have done a lot of joint work with the property management company and residents. Thanks to this, all the feedback was taken into account. For example, an apple tree grows in the center of the yard, so we installed benches around it, and now it has become the central resting place for residents of these houses”, - S.Mironov said.

The road pavement, outdoor lighting networks were completely updated, sidewalks, green areas were landscaped, benches, small architectural forms and a playground were installed. Special attention was paid to parking areas: thanks to the expansion of the roadway in the yards of 5 houses, the number of parking spaces increased from 9 to 79. In addition, a separate waste collection area was equipped in the yard.

The Mayor of Kazan talked with the residents of the houses to find out their opinion about the improvement. “The best achievement is to see how parents play with their children in equipped yards. The number of people who enjoy spending time at their yard will increase every year”, - I.Metshin noted in a conversation with one of the residents.

Alongside the complex improvement of yards, renovation of houses No. 152 and No. 154 on Dekabristov Street are being carried out. Contractors are updating facades, replacing entrance doors and utilities.

Last year, similar works were carried out at 5 Volgogradskaya St. and 150 Dekabristov St. During the overhaul, innovative solutions for housing and utilities were used. Four solar panels were installed on the roof of residential building on Volgogradskaya St. to provide electricity to entrances. “The charge of solar panels is enough for many hours of operation even in winter,”- S. Mironov noted. The panels will be paid off after about 3.5 years of their use, which allows residents to significantly save on utility bills. In addition, smart metering devices are installed in the house, which allow to take readings in all apartments.

Ilsur Metshin inspected the first yard charging station for e-cars in Kazan, located in the yard of the house, and the first electric sweeper in Tatarstan. “The new equipment replaces the work of seven janitors, and the battery charge is enough for it to run about 100 km and clean about 10-12 yards,”- the head of the district administration stressed. “Such an innovation is an excellent help in cleaning Kazan yards”, - the Mayor noted.

Multimedia
Previous news
The second branch of the children's polyclinic No. 4 has opened in Salavat Kupere
Next news
The “Good Kazan” Coworking will bring together over 100 charitable communities
Personal
Official site