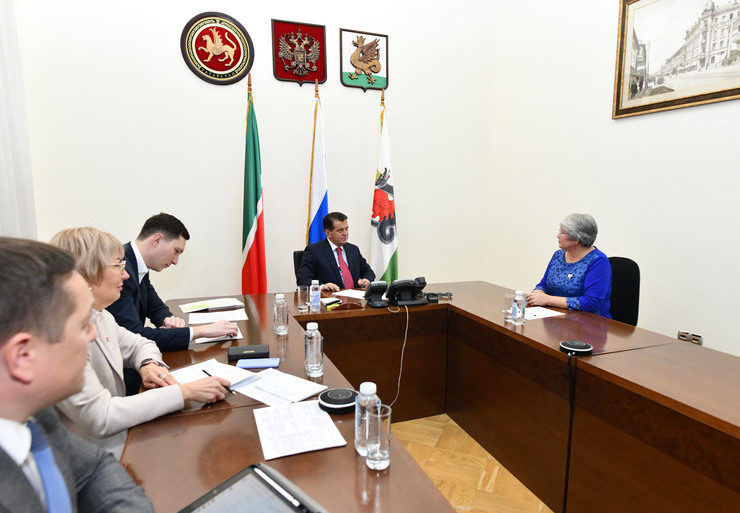 The citizens interested on the support of the families of the mobilized, removal of illegal dump on Uchitelskaya St.
read more
News

The second branch of the children's polyclinic No. 4 has opened in Salavat Kupere

Today, the second branch of the children's city polyclinic No. 4 has opened in Salavat Kupere residential area, which is located on N.Yusupov str., 3b. This is the first medical institution located in the second part of the district. It is planned that more than 2.5 thousand children will receive medical care here, and employees will be able to serve up to 125 visitors per shift. The entire medical staff of the branch lives in Salavat Kupere. The Mayor of Kazan Ilsur Metshin and the Minister of Health of the republic of Tatarstan Marat Sadykov took part in the opening of a new medical facility.

Presently, almost 25 thousand Kazan residents live in Salavat Kupere, 3 schools, 8 kindergartens and a teen club operate on the territory of the district. The opening of the children's polyclinic was a long-awaited event for the residents of the second part of Salavat Kupere. “A large number of appeals from residents related health care. A polyclinic is already functioning in the first part of the district, but it was inconvenient for residents of the second part of Salavat Kupere to get to the institution, - I.Metshin noted. - After opening a branch here, 2.5 thousand kids will receive high-quality health care. I am very grateful for this to the leadership of the republic and colleagues from the Ministry of Health of Tatarstan”.

“All districts of Kazan, regardless of location – the city center, Azino or Salavat Kupere – should have a developed infrastructure”, - the Mayor stressed. He reminded that the construction of the second stage of the park is continuing in the district, and residents will have a modern public space with playgrounds and sports grounds, an artificial lake with a pier and an amphitheater and other areas.

A branch of the children's polyclinic No. 4 with a total area of 336.8 sq.m opened on the first floor of a residential building. Repair work began in October last year, and today the medical institution has already begun to serve the first patients. Niaz Galeyev, chief physician of the children's city polyclinic No. 4, showed the visitors two pediatric departments, a biomaterial sampling office, vaccination and procedure rooms, a doctor’s office, room for nursing children and bathrooms for people with disabilities.

Examination of children with a rash, diarrhea, vomiting and suspected infectious diseases will be carried out on a filter room. In addition, there is a point of delivery of free dairy food. “The repairs in the branch are made at a high-quality level, and the design project of the offices is very cozy”, - the head of the city noted.

Eleven health workers, including two doctors and 7 nurses, will serve young patients in the branch. Niaz Galeyev said that all employees live in Salavat Kupere.

For reference, the first branch of the children's polyclinic No. 4 serves more than 6 thousand children.

According to the health development program in Salavat Kupere, the construction of a polyclinic at the intersection of Nurikhan Fattakh St. and Nail Yusupov St. continues. “The new medical facility will occupy an area of 8,500 square meters. Its design capacity is designed to serve up to 750 people a day, including 250 children”, - Tatarstan Minister of Health Marat Sadykov reported.