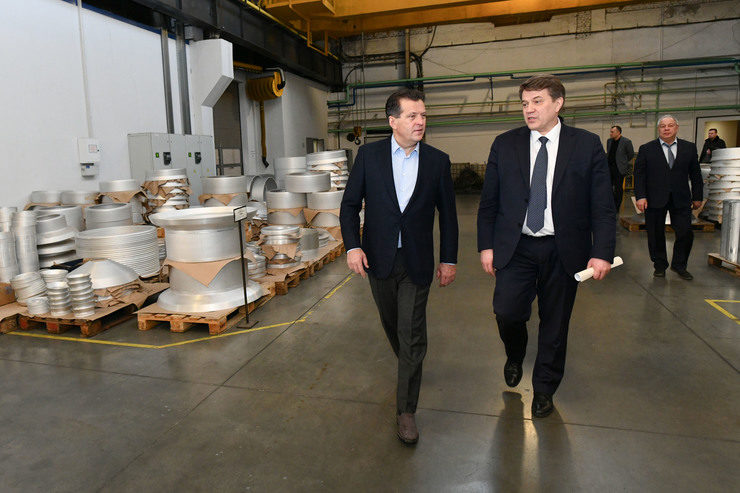 I.Metshin about Vacuummash: “Today, it continues to operate, as well as to grow steadily

The Mayor of Kazan inspected the workshops and talked with the employees of the company that produces vacuum pumps.
read more
News

I.Metshin gets acquainted with an improvement project of a public garden in the Moskovsky district of Kazan

In 2023, a new public garden will appear in Kazan along Gagarin Street in the Moskovsky district. More than 1,400 people live nearby the new public space. The project of improvement of a site with an area of 2,500 square meters was presented today to the Mayor of the capital of Tatarstan Ilsur Metshin.

The territory is located between the residential buildings at 107 Gagarin Street, 20 and 54 Voskhod Street. As I. Metshin noted, these places are famous for their history –famous aircraft builders and pilots lived here. This yard has also become a home for Andrey Belyakov, Director of the Briz Group of Companies– the company and the administration of the Kirovsky and Moskovsky districts initiated the improvement of the territory. “Andrey Yevgenievich, as a person who was born and grew up here, joined us in this project,”- the Mayor reminded about the work carried out in the yard.

In 2018, the improvement of the public garden at the neighboring yard began, named “I choose the sky”. Asphalt with an area of 6,100 square meters was renewed, small architectural forms were installed, the container site was reconstructed and the territory was landscaped. The total cost of the work amounted to 17.1 million rubles. The work was carried out by the Briz Group of Companies and LLC Property management company of the Moskovsky district, as well as under the repair program of the intra-block driveways of Kazan yard territories.

According to I. Metshin, after the improvement of the yard, which became a point of attraction for children and youth, appeals were received from residents to provide recreation areas as well. Therefore, for example, in the project of the new public garden, tables for playing chess and dominoes were equipped– this area is also suitable for elderly residents.

Preparatory work is currently underway on the site, for example, 12 abandoned garages have been demolished. Also, a sidewalk was laid on an area of 732 sq.m. “There were no asphalt paths at all. We have also added a bike path. And all old pedestrian connections were maintained. This is one of the busiest pedestrian arteries,”- Sergei Mironov, head of the administration of the Kirovsky and Moskovsky districts, told the mayor.

“This yard has a history, - said one of the authors of the improvement project, architect Almaz Daminov. – For example, the sidewall of the school has been preserved, such were in the 60s, as well as other historical buildings.” According to him, the preservation of the identity of the district will become one of the priorities when carrying out improvement works.

“We are moving to the second stage, and you are still with us, Andrey Yevgenievich, thank you very much, as well as other caring residents of Kazan. We hope to meet here at the end of summer, by the City Day,”- the Mayor concluded.

Multimedia
Previous news
Ilsur Metshin has visited the production site of the Tatchempharmpreparaty Company
Next news
I.Metshin: “The withdrawal of foreign companies is a niche to grow and occupy this market in the economy of the city and the republic”
Personal
Official site